Due to unexpected weather the team was forced to abandon their summit attempt. High winds blew in the night before their planned summit attempt and didn't subside until 3 that morning. Rather than risking a descent in the dark, the team retreated back to ABC to await a better weather window later in the week.

Have a listen!
Posted by Field Touring Alpine at 1:18 PM No comments:

Posted by Field Touring Alpine at 12:02 AM 2 comments:

Ben phoned in from ABC to let us know that the remaining members of the team still in need of the summit are taking a few days off for some well deserved r&r before heading higher. Their plan is to start heading back up the hill on the 11th, then hopefully to the summit on the 14th.
Have a listen!
Be on the lookout for audio dispatches from the higher camps including one from the summit!
Posted by Field Touring Alpine at 10:56 AM No comments:

Posted by Field Touring Alpine at 3:29 AM No comments: 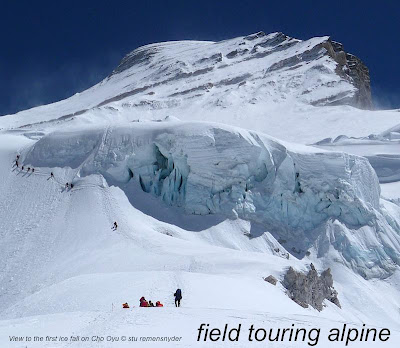 see our website for the latest dates and prices!
www.fieldtouringalpine.com
Posted by Field Touring Alpine at 3:08 AM 1 comment: