We have an exciting summer ahead with a team of 17 climbers, guides and HAP's headed to Broad Peak and K2. This trip will be followed up by another great trip to 7027m Spantik so stay tuned all summer!

The K2 & Broad Peak trip officially begins today with members from all over the world arriving in Islamabad though one of our guides, Tim Colquhoun, has been working hard getting gear ready in Skardu. He'll be assisting on Broad Peak and then leading the Spantik team so he's going to get to know the gear room very well! 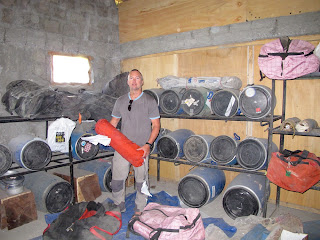 When Tim has not been too busy with checking out tents, stoves, pts and pans he has enjoyed some travel around Skardu and also up to Hushe where he met famed HAP Little Karim. Tim dropped the following note from dusty Skardu:


Just over a week into a 3 month trip to Pakistan ,my first ,and my only disappointment is that i didn't come here sooner ! From the bustling bazaar in Skardu to the mountain village of Hushe Ive been greeted with welcoming smiles and hand shakes every where !

Due to the bad press that Pakistan has been receiving, tourist numbers are well down at the moment, but the locals in Baltistan go out of their way to make you feel welcome ! The first expds have started to leave Skardu,with teams from Austria and France heading out to the Trango Towers and Laila Peak the last couple of days !

With Chris organising and sending gear out from KTM ,myself and some of ATPs HAPs going through the stores in Skardu and Stu and Dave coordinating from opisite sides of the globe , FTAs preparations for this seasons expds in Pakistan are nearing completion !

Im looking forward to meeting the rest of FTAs BP and K2 team in Skardu over the next few days and moving out into the Karakorum !


Lots more to come in the months ahead but in the meantime.....

• Satopanth in September also confirmed with spots still. Steep snow and ice to just over 7000m in With Chris Szymiec

• Ama Dablam Nov 4 trip confirmed. Join us for our 7th year in a row!

• Aconcagua trips in Dec, Jan and Feb all beginning to fill so sign up soon!

all this and much much more ahead!
Posted by Field Touring Alpine at 6:16 AM

Good luck to everyone heading for BP this year! Can't believe a new season is kicking off already! Wish I was back in Skardu too.

And congrats to Chris S on the recent Everest summit!!

best of luck to every member of K2 expedition.

I also from Baltistan. I am visiting Skardu in the end of July 2011. I will try to visit this beautiful place.