Summit and descending!
Ron and Scott made a summit bid today leaving from camp three at about 7100m. Ron managed to top out along with three high altitude porters while Scott turned about shortly before the top. They are on descent and we look forward to hearing the details when they get back down!
[note: we have now heard that our BC staff may have been a bit excited and Ron only reached the false summit- we are awaiting his return to base camp and will update ASAP!]


Successful Evacuation
Brian has already made his way out from base camp on a helicopter flight yesterday and is now on his way back home. John was able to accompany him out as well and give hims support at every turn. Our ground staff did a great job hustling them through the process of evaluation and them down to Islamabad. Brian is sporting a nice caste from the Pakistani Military hospital and we thank them for all of their help as well.

Summit Bid Ahead
With a 2-3 day weather window over the weekend looking quite good, Ron and Scott will be heading up to Camp 2 (6200m/20,400ft) tomorrow and hoping for a summit bid on the 14th if all goes well. The weather looks to be holding into the 15th so they may have a spare day to work with. They will be on the hill for a few days so we may not hear directly from them til monday or tuesday but will be able to follow along from our bc staff.

They are well acclimatized from sleeping at Camp 2 and both had been to over 7000m/23,100ft on the last round up. Camp 3 is typically located above 7100m leaving about 900m vertical on the summit day. In some years we push the camp up rather than summit directly from Camp 3 as this can shorten the summit day. They will have to see how they are going when they arrive and will either head straight for the top the next day or push camp up and try for the top the following morning. Factors that will plan into the decision include snow conditions, route fixing concerns and other climbers on the hill to join forces with to push the route through. 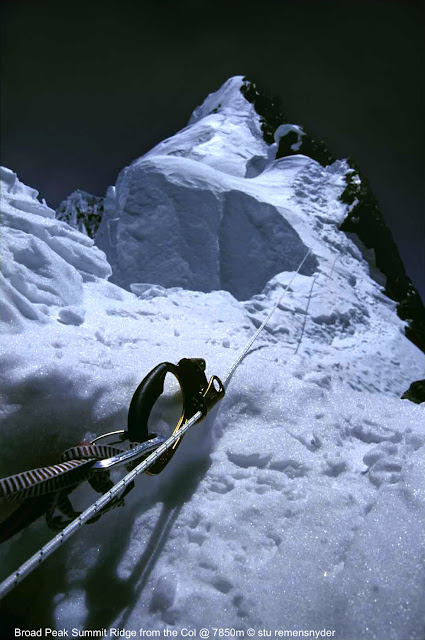 On summit day they will work from camp on moderate terrain to the base of the col where it steepens up considerably for about 50-100 meters and can often be as much as 50-60° of snow, ice or rock. One they have gained the col at 7850m they have to negotiate an exposed and sinuous ascending ridge with short rocky and snow/ice steps to reach the fore summit at about 8030m. This is often as far as climbers get as the next 16 vertical meters is nearly 900m away and one must be feeling strong as the trip over and back can still be a few more hours of the hardest work one has ever done. On ascent the right side of the ridge looks steeply all the way back down the base camp in Pakistan while the left side drops nearly vertically many thousands of feet down in to China.

We will have word on their progress and post it here!

Ecav Update
The last 4 days have seen a lot of mediocre weather in base camp or in Skardu (or both) and Brian is still waiting along with John for the arrival of the helicopter. He is resting well, watching reruns of movies on an iPad and looking forward to a soft bed in the next few days. Today the weather was better in Skardu and base camp but still poor in-between. We hope tomorrow will bring the clear weather needed for a safe flight out.

The image below is from 2003 and shows the kind of terrain for the landing and why it is important that they have excellent visibility and proper winds for landing in the thin air at 4800m/15,800ft.

Posted by Field Touring Alpine at 11:43 AM No comments:

FTA Broad Peak 2013 update - Team in BC after C2 rotation

Over the last 3-4 days our team spent nights at C1 and C2 and even tagged C3 before descending to base camp for a rest period. They enjoyed great views of K2 and life high on the steep mountain during this time and are quite well acclimatized to 6200m or better now.

Unfortunately, on the descent below C1, Brian sustained a lowed leg injury and had to be assisted to return to base camp. A few climbers from other teams, local HAPs and a rescue group from Concordia all assisted and we thank them all for their great help. His injury is serious enough that he will need to have a flight out but he is uninjured aside from his leg injury. When he is back in Skardu we will be able to assess the full extent of the injury and sort out his best course for treatment and return home.

We have arranged for a helicopter flight out and are awaiting good weather for the next chance for them to fly him out. At this time the whole team is safely resting at base camp under the cover of clouds and hoping for clearer skies tomorrow.

After a few days at base camp the remaining members will look to make a final cycle to spend a night at C3 before looking for a summit bid. Having already had nights at C2 though it is possible for the team to make a bid on the next round up and the long term forecast looks like a low wind period perhaps around the 17th of july.

We will have more updates on Brian's evacuation and the climbing plan in the next 24-48 hours and post it then.


Posted by Field Touring Alpine at 10:41 AM No comments:

Our team calls in from BC to let us know they will be on the hill for the next few days working their way up to C2 and then back down again. They may be out of touch for a few days and back in touch on the 7th or 8th when back in base camp.

In the mean time you can hear them on your mobile device by visiting our channel on the ipadio site itself: FTA Audio Dispatches on ipadio
Posted by Field Touring Alpine at 5:00 AM No comments:

In the mean time you can hear them on your mobile device by visiting our channel on the ipadio site itself: FTA Audio Dispatches on ipadio
Posted by Field Touring Alpine at 6:02 AM No comments: